This memorial is filled with memories of  Elizabethtown & Hardin County's most respected newsman...complete with sights and sounds of  the 31 years he served the community, most of which he spent at WIEL. We have  received many clips and photos, but can always use more! If you have anything you would like to share or contribute for this honorary page, contact the webmaster's address at the bottom of the home page. 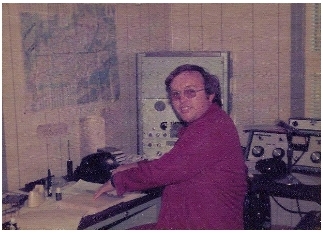 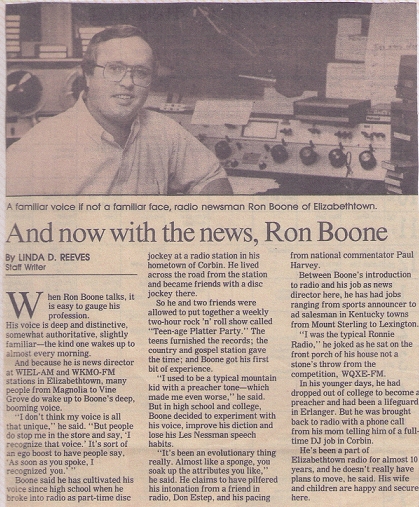 ...and the News-Enterprise tells us about it.

Ron bids farewell...but only for a season.

Ron Doing What He Does Best


*
Ron loved looking back fondly and you can listen to interviews with former General Manager Dee Huddleston for his thoughts on sports director Dick Curtis and the late Bill Earle in When the Boss Talks About You, found by going here.

We've set aside a place on this site for personal tributes by those who loved him, including family, friends & former colleagues, all of which appear below in a special section called...

"It was fun to watch Ron bolt through the front door, slide into his chair and hit that mike cold, right on cue with his first story. He was the most principled, responsible, articulate and dedicated newsperson that I have ever worked with. He was totally dedicated to his craft and his family. I doubt that there were any persons of note in Hardin County who didn't know Ron personally, or at least know of him. I feel privileged to share my memories of working with Ron Boone.

Because the coffee in the kitchen was often terrible,I kept my own jar of instant in my desk. That was my little secret...or so I thought. I usually just drank a cup in the morning while getting organized for the day. Gradually I noticed that SOMEBODY was stealing my coffee!! Nobody confessed. The morning before we all went home to enjoy Christmas with our families, I found a HUGE jar of coffee on my desk, tied with a big red ribbon and a card which read:


He was the LAST one in the building I would have thought to be the coffee thief, and we both enjoyed a big laugh over it. Then there was the time that Ron and I gave a stray dog a bath in the deep old kitchen sink and got in a lot of trouble! More insight into Ron's compassionate nature involves my accepting an offer from  another station. My background had been in copywriting, traffic, public service and sales secretary in television. I love working with the public, but lack the aggressiveness required to be successful in either sales or news...but there I was,  with the overnight title of News Director!  To make matters even more intimidating, their News Director had quit, leaving a bare office with no contacts or instructions. I had no help from any source and felt like a fish in the middle of the Mohave Desert. From listening to Ron's newscasts I was aware of several "must attend" meetings.

At my first meeting, Ron motioned me over to sit with him. He gave me a complete list of meetings, explained who was who, and invited me to sit with him at various meetings so I could learn the news trade. He bolstered me up and gave me strength to face another day in the rival station's newsroom. I gained more confidence in assembling the news, while remaining fully aware that my delivery was timid and flat. Assessing the total situation as unrewarding, depressing and futile, I resigned after 6 months. Had it not been for Ron, I would have thrown in the towel after 2 weeks. He was just that kind of good person and friend.
When I returned to WIEL several years later to work for Charlie Harper, Ron was with another local station. Charlie had me go through all of the past station records and files, put them in order and dispense with the past. During that time, we had several newsmen come and go. While clearing the newsroom of various notes and debris left behind, I found numerous reel-to-reel tapes that HAD to belong to Ron Boone, the ambitious "Rock" of Hardin County. I put them all in a box, took them home and called Ron. He said "Please hang on to them for me. I'll pick them up". I put them away and forgot about them until one day Ron called to ask if I had his April 3rd tornado tape because "that" day was approaching. He had few of them labeled, so I couldn't identify what he needed and took the whole box down to the station. He was like a kid at Christmas, going through his old tapes. He was able to identify every story, after several years, just by looking at the unlabeled reels. After he passed, I thought about that and hoped that someone had given those precious souvenirs to his wife, Judy.
And finally...leafing through my radio scrapbooks, I came across the program from "By Way of the Valley", a play celebrating our 1976 Bicentennial, in which Ron played P.T. Barnum. In my program he wrote:

Deanna, I'm glad you and Lisa (my daughter) could see the show. I've seen many people come and go at WIEL and I can count the real "Pros" on one hand - you're one!

I could say that right back to Ron. He was a true gentleman, a real "Pro" and a great loss to the people of Hardin County who depended on him for their news, as well as those who had the privilege of working with him. He's no doubt up there somewhere, reporting on the conferences and picnics of the Angels.
Deanna Pozesny


On June 7, 2007 we had the pleasure of talking with Kathleen Booker, 85, of Cecilia, who has written the White Mills News for the Elizabethtown News and News-Enterprise for close to 40 years. Like many others, she had a special bond with Ron Boone, and she shares it with us in the interview below. 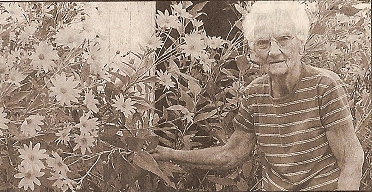 Kathleen Booker
(photo from the News-Enterprise) 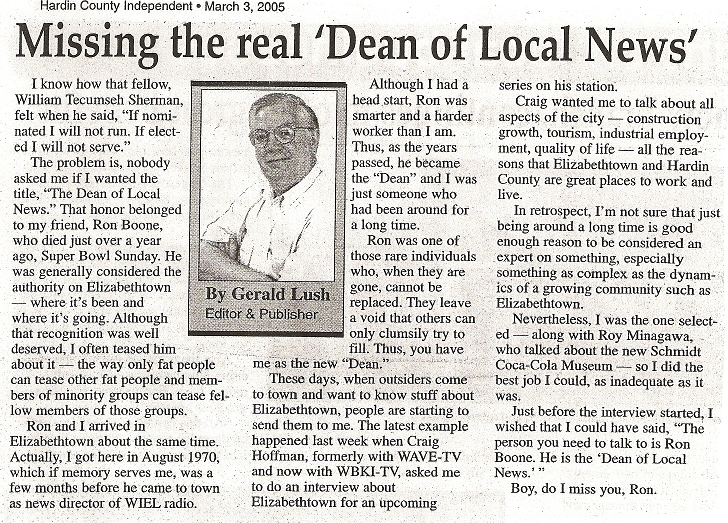 E.J. Clark shares his thoughts of Ron 10/4/07. These, along with those of Bob Craft, Chuck Spataro, Deanna Pozesny, Judy Boone and Kathleen Booker will be a part of a special presentation of Heart of the Matter,"A Tribute to Ron Boone Part 2", airing October 7, 2007.

***
In September and October of 2007, WIEL aired a repeat broadcast of 'A Tribute to Ron Boone' (originally in 2004) and the debut presentation of 'A Tribute to Ron Boone Part 2', both of which are divided to save upload time.
***
Scott Goettel shares his thoughts of Ron on 02/16/08. Scott worked with Ron in the mornings in the 80's, where the two were a morning hit with morning risers and commuters.